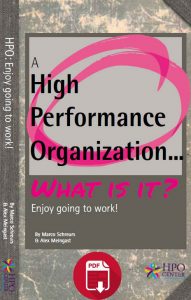 Or buy at Amazon (Kindle or Paperback)

Over the past decade, research into the concept of the high performance organization(HPO) has enjoyed continuing interest (McFarland, 2008; Hensmans et al., 2013; Park et al., 2013). This is because being an HPO − which is defined as an organization that achieves financial and non-financial results that are exceedingly better than those of its peer group over a period of time of five years or more, by focusing in a disciplined way on what really matters to the organization (de Waal, 2012a) − is seen as away not only to survive but to thrive in difficult economic circumstances. Scholars and consultants have derived various theories of high performance and organizational effectiveness through close analysis of successful businesses and their practices. For example, Weber (1906, in Allied Consultants Europe (ACE), 2005) in his Scientific Management Theory emphasized the importance of organizational structure and processes; Drucker and Van de Ven (in Wren, 2005) emphasized aligning employee behavior to organizational strategy (in ACE, 2005; Wren, 2005); while Deming (1986, in ACE, 2005; Wren, 2005) emphasized the need of measuring people, processes and outcomes.

A recently developed HPO Framework is the one by de Waal (2012a, b) who spent ten years studying excellent, mediocre and bad organizations around the world. The HPO Framework (see the Appendix) was developed based on a review of 290 academic and practitioner publications on high performance and organizational effectiveness and a survey administered to organizations worldwide. The framework was subsequently validated for various Asian (de Waal et al., 2009; de Waal and Frijns, 2011; de Waal and Haas, 2013; de Waal and Tan Akaraborworn, 2013), African (de Waal and Chachage, 2011; de Waal et al., 2014), North-American (de Waal, 2012a), European (de Waal, 2012a) and Middle Eastern (de Waal and Sultan, 2012) countries. Studies in both western and non-western societies have shown the implications of different cultures for organizational structures, operations and performance (Aluko, 2003). Hofstede (1980) showed that national culture may affect managerial behavior, by influencing managers to support organizational values that are in conformity with the basic assumptions and beliefs they acquire and develop in their particular cultural contexts. However, the aforementioned validation studies of the HPO Framework seem to indicate the framework is generically valid in multiple contexts. The explanation for this apparent contradiction is that the HPO Framework indicates what is important for organizations to improve in order to become HPO, while it does not give ways how to improve the what. Thus, the what is generic valid while the how depends on the cultural context. For example, the HPO characteristic “Management is trusted by employees” is valid in every context as management which is not trusted cannot be effective no matter what the circumstances are. However, how management obtains and keeps the trust of employees could, and probably will, differ depending on the cultural context. So the HPO Framework indicates what the characteristics are an organization needs to strengthen in order to become highly effective and thus high performing (Richard et al., 2009), while it does not gives a “recipe” how to strengthen these characteristics, nor does it indicate in which order the characteristics need to be strengthened. Thus, there is also a question whether the priority of addressing the HPO characteristics is context dependent. This issue of priority-setting is a relevant one as an increasing number or organizations have a multi-national workforce with different cultural backgrounds. If there are cultural differences which can appear during the process of priority-setting, choosing which HPO characteristics to work on first can give ample opportunity for misunderstandings as the HPO Framework contains 35 characteristics. This is not an academic matter as Zwi and Mills (1995) described differences between developed and developing countries in choosing priorities regarding health policies, and Fink and Meierewert (2004) found cultural differences in priority-setting between West European managers and Eastern European managers while deciding on which tasks should be performed first. The study described in this paperis an attempt to evaluate whether priority-setting in relation to the HPO Framework is context dependent. It does this by investigating whether there are common views or differences among business students from different cultures on what they conceive to be the priority among characteristics in the HPO Framework. Specifically, the study tries to answer the research question:

RQ1. Are there similarities or differences among business students from South Africa and Tanzania in their perceptions of what the priority should be in regard to strengthening specific characteristics in the HPO Framework?

The reason for using business students as the research population was threefold. First, it is a matter of convenience. A class setting makes it possible to get a relatively homogeneous population (e.g. people who are about the same age and have the same interests and goals, in the case obtaining an MBA) which has one main differentiating trait (e.g. nationality). Second, business students are people undergoing training in order to become business leaders of the future. As such, their perceptions regarding the priority in HPO characteristics will have a significant influence on how future businesses will be shaped. Third, sampling only students in business programs enhances cross-cultural comparability by effectively controlling for important variables such as literacy and work experience (Muller and Thomas, 2001).
This study aims to fill a research gap concerning how (future) managers will in practice use an HPO Framework to give direction to their future improvement actions at their organizations. The study also contributes to the literature by shedding light on the issue whether priority-setting is culture dependent. The remainder of the paper is organized as follows. In Section 2 we present the literature review and in Section 3 the research methodology. The empirical findings are reported and discussed in Section 4 and Section 5, respectively, while the conclusion, limitations of the study and opportunities for further research are given in Section 6.

In this section, overviews are given of Waal’s HPO Framework, the concept of culture and Hofstede’s cultural dimensions. Subsequently, the relation between culture and the HPO Framework is discussed, and the section ends with a treatise on the influence of culture on management in South Africa and Tanzania. 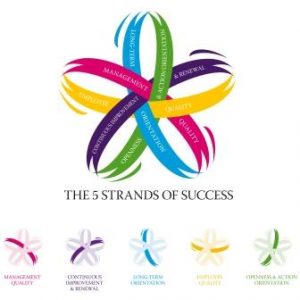 The HPO Framework consists of the following five HPO factors (de Waal, 2012a):

The HPO Framework has subsequently been empirically validated in various countries by administering the questionnaire to organizations in a country and performing confirmatory factor analyses on the collected data. In each case, basically the same factors with underlying characteristics – or a subset of these – appeared (de Waal et al., 2009, 2014; de Waal and Chachage, 2011; de Waal and Frijns, 2011; de Waal, 2012a; de Waal and Sultan, 2012; de Waal and Haas, 2013; de Waal and Tan Akaraborworn, 2013).

Many definitions of culture can be found in the literature. Kroeber and Kluckhohn (1952) compiled a list of 164 definitions of culture, and this number has been increasing ever since (Hofstede, 2001; Soudijn et al., 1990). However, the most commonly used definitions are from Hofstede (1980) and House et al. (2004). Hofstede (1980) defines culture as the collective programming of the mind, which distinguishes the members of one group of people from another. House et al. (2004) define culture as shared motives, values, beliefs, identities and interpretations or meaning of important events that originate from common experiences of people from the same group. Culture is evident in the values and beliefs held by a particular society (Dunn and Shome, 2007). These values are holistic, historically determined and socially constructed (Detert et al., 2000). They are the “common characteristics that influence a group’s response to its environment” (Hofstede, 1980, p. 19). The “cultural programming” begins at birth and continues throughout the individual’s life within a particular society (Hofstede, 1980). Thus, a persons’behavior is conditioned by the cultural norms and values of the environment in which the person grows up (Muller and Thomas, 2001; Hofstede, 1980, 1991; Triandis, 2001). Similarly, a manager’s belief systems are strongly influenced by his or her cultural assumptions and values, which in turn affect the way business problems, are perceived, leading to different approaches used to solving organizational problems (Sparrow and Wu, 1998). This, in turn, results in distinctly different ways of dealing with similar business situations depending on the norms prevailing within a given cultural environment (Dunn and Shome, 2007). Thus, the influence of culture on the construction and workings of an HPO cannot be ignored and has to be investigated, using the culture dimensions as developed by Hofstede (1980).

Hofstede (1980), in his research comprising 116,000 questionnaires which were completed by over 88,000 IBM employees in 72 countries, identified four bipolar cultural dimensions which have become a common basis of measurement of national culture (d’Iribarne, 1997; Dorfman and Howell, 1988; Schneider and Barsoux, 1997). In a later study Hofstede introduced a fifth dimensions, long/short term orientation, in an attempt to fit the uncertainty avoidance dimension into the Asian culture (Hofstede and Bond, 1984, 1988). However, this dimension has not been included in this research. The four original dimensions of national culture are described below:

2.4 Relationship between the HPO Framework and culture

In this section, the relation between Hofstede’s cultural dimensions and the HPO Framework is discussed.

2.4.1 Power distance and HPO. In high power distance cultures, the role of the leader is stressed more strongly and the number of hierarchical levels is larger than in low power distance cultures (Blunt, 1988; Gupta, 2011; Hofstede, 2001; Largrosen, 2002). In this culture, empowerment and participative decision making are discouraged (Flynn and Saladin, 2001) and managers are seen to communicate less with their subordinates about the strategy and results of the organization (Snell and Hui, 2000). The large number of hierarchical levels prohibits employees from spontaneously and independently developing systematic improvement approaches, because subordinates first need to seek the approval of their managers (Lillrank et al., 2001; Snell and Hui, 2000). In addition, interactions and discussions with stakeholders at various levels, to build strong personal relationships, are hampered (Flynn and Saladin, 2001).
In contrast, in low power distance cultures employees have more freedom to use their own discretion (Gelfand et al., 2007) and to facilitate effective and efficient decision making at lower levels of the organization. Significant emphasis is placed on training subordinates on how to assume various roles (Largrosen, 2002), and employees have more….

Read this paper about the relation between Hofstede’s cultural dimensions and the HPO Framework in PDF!

For more information about the HPO Framework, HPO Experts, workshops and our do-it-yourself HPO Insight™ improvement tool, please contact us (schreurs@hpocenter.com or T. +31 (0) 35 – 603 70 07).