Design/methodology/approach: For this research, the Performance Management Analysis (PMA) and the HPO Framework and were 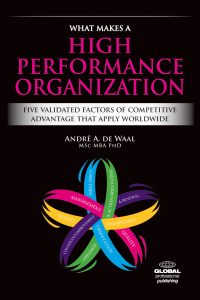 Findings: Theoretically, a strong correlation between the PMA and the HPO Framework was predicted. The research results indeed showed strong and significant correlations between all the PMA dimensions and all the HPO factors , indicating that a performance management system that fosters performance-driven behaviour in the organisation is indeed of critical importance to create an HPO.

However, Waal and Kourtit (2013) did find some disadvantages from using performance management, such as information overload, too much subjectivity, too much financial and backward-looking information, and a too expensive and bureaucratic approach, but these disadvantages were only found on a limited scale. In summary, it can be said that implementing performance management is considered to be a constructive means for an organisation to gain competitive advantage and to continuously react and adapt to external changes (Chau, 2008; Cocca and Alberti, 2010).

As such, performance management may be a useful tool for organizations to support them in their journey 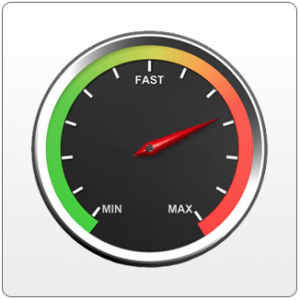 toward becoming an high performance organization (HPO). An HPO is defined as an organization that achieves financial and non-financial results that are exceedingly better than those of its peer group over a period of five years or more, by focusing in a disciplined way on that what really matters to the organization (Waal, 2012). In order to create a sustainable HPO, managers and employees alike have to behave in such a way that the objectives and goals of the organization are achieved on a world-class level. In practice, this implies that the organization has to be structured to such an extent that its performance management systems provide the right information so that the organisation’s people can behave in a performance-driven manner. In this article, the relationship between performance management and the HPO is investigated on a detailed level, using the Performance Management Analysis (PMA) (Waal, 2010) and the HPO Framework (Waal, 2012), in order to evaluate which dimensions of performance management have the highest impact on achieving high performance. This is important because the outcomes of this research can be used by organizations to shape their performance management systems, which, in turn, will help them in their quest to become an HPO. This article is structured as follows. In the next two sections, the HPO Framework and the PMA are described. Then the methodological approach and research results are given. The article ends with a conclusion, the limitations of the research, and opportunities for future research.

The HPO Framework was developed on the basis of a descriptive literature review of 290 academic and practitioner publications about high performance (Waal, 2012, 2014). Out of each of the reviewed publications, those elements were extracted that the authors regarded as essential for becoming an HPO. Because the authors of the various scholarly contributions used different terminologies, the identified elements were grouped into categories which constituted possible HPO characteristics. For each of the possible HPO characteristics, the ‘weighted importance’ was calculated, i.e. the number of times that it was mentioned in the publications. Finally, the possible HPO characteristics with the highest weighted importance were included in an HPO

The five HPO factors are described underneath (for a detailed description see Appendix 1):

1. Management Quality. In an HPO, belief and trust in others and fair treatment are encouraged. Managers are trustworthy, live with integrity, show commitment, enthusiasm, and respect, and have a decisive, action-focused decision-making style. Management hold people accountable for their results by maintaining clear accountability for performance. Values and strategy are communicated throughout the organization, so that everyone knows and embraces these.

2. Openness and Action-Orientation. HPOs have an open culture, which means that management values the opinions of employees and involves them in important organizational processes. Making mistakes is allowed and is regarded as an opportunity to learn. Employees spend a lot of time on dialogue, knowledge exchange, and learning, to develop new ideas aimed at increasing their performance and make the organization performance-driven. Managers are personally involved in experimenting thereby fostering an environment of change in the organization.

3. Long-Term Orientation. An HPO grows through partnerships with suppliers and customers, so that long-term commitment is extended to all stakeholders. Vacancies are filled by high-potential internal candidates, and people are encouraged to become leaders. The HPO creates a safe and secure workplace (both physical and mental), and lays off people only as a last resort.

4. Continuous Improvement and Renewal. An HPO compensates for dying strategies by renewing them and making them unique. The organization continuously improves, simplifies and aligns its processes and innovates its products and services, creating new sources of competitive advantage to respond to market changes. Furthermore, the HPO manages its core competences efficiently, and out-source non-core competences.

5. Workforce Quality. An HPO assembles and recruits a diverse and complementary management team and workforce with maximum work flexibility. The workforce is trained to be resilient and flexible. They are encouraged to develop their skills to accomplish extraordinary results and held responsible for their performance, as a result of which creativity is increased, leading to better results.

The HPO Framework is build upon the idea that there is a direct and positive relationship between the identified HPO factors and competitive performance: the higher the HPO scores the better the performance of the organization, and vice versa. An organization can empirically investigate its HPO status by having management and employees fill in an HPO questionnaire and calculating the average scores on the HPO factors.

The nine PMA dimensions are described underneath (for a detailed description see Appendix 2):

For this research, the PMA and the HPO Framework were combined in one questionnaire, which was distributed to two multinational companies operating in Europe. One of the organizations was a bank of which the Dutch branch offices participated. The other organization was a car rental agency of which the sales offices in five countries (Netherlands, UK, Spain, Germany, France) participated. In the questionnaire, managers and employees of an organization were asked to rate their organization on the 35 HPO characteristics and the nine PMA characteristics, on a scale of 1 (the organization does not satisfy the characteristic at all) to 10 (the organization satisfies the characteristic completely). The scores of all respondents were averaged for
the five HPO factors and the nine PMA dimensions. In total, 468 valid questionnaires were received, out of a possible total of 2,024 respondents, implying a response rate of 23.1 percent. Using the final valid sample of 468 respondents, a correlation analysis was performed on the HPO factors and the PMA dimensions.

Click to read the complete conference paper (The Role of Performance Management in the High Performance Organisation) in PDF!aal Heijden – PMA 2014 Conference – Role of PM in HPO