As it has always been the intention of the HPO Center to make the results of the HPO research tangible and practical for organizations, to 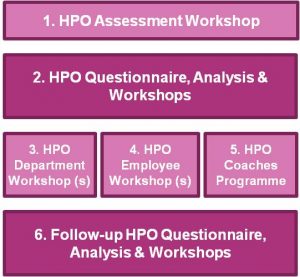 allow them to use the HPO Framework for improving themselves, the HPO Center developed an HPO Diagnosis, shown in Figure 2.2.

Step 1 of the HPO Diagnosis consists of a workshop with senior executives in which a short HPO assessment is made of the organization, based on the views of the executives. As part of the assessment participants fill in the HPO Questionnaire, consisting of questions based on the 35 HPO characteristics with possible answers on an absolute scale of 1 (very poor) to 10 (excellent). After this, the HPO scores are calculated and analyzed by the HPO Center. The scores for the five HPO factors (HPO scores) are visualized in a graph. This graph indicates whether the organization is an HPO or not; to be an HPO the average HPO score of each HPO factor have to be at least 8.5. The graph also shows which characteristics need to be improved to increase the performance of the organization. The HPO Framework, the results of the analysis and the HPO graph are discussed with senior executives, to increase the understanding of the persons who are going to work with the HPO Framework.

Step 2 of the HPO Diagnosis is a full HPO analysis in which as many people at all levels of the organization fill in the HPO Questionnaire, to obtain a complete picture of the organization. The HPO scores are calculated for the whole organization, its business units and its organizational levels (senior managers, managers, employees). Subsequently, interviews are held by the HPO Center with a selection of staff from across the organization to ‘get the stories behind the figures.’ The data and interviews are analyzed, to identify the points which have to be improved and strengthened in order for the organization to become an HPO. The analysis results are shared then with senior executives and management in an awareness workshop to increase the understanding of those that will be working with the HPO Framework, the current HPO-status of the organization and the ‘HPO attention points’. This is followed by a call to action workshop in which senior executives, managers and the HPO Center discuss possible actions to address the HPO attention points and an action plan is drawn up. The action plan consists of two parts:

During step 3, the HPO Diagnosis is taken a level deeper into the organization. A detailed analysis of the HPO scores is made per organizational unit (department, business unit, country) and additional interviews are held, to identify the HPO attention points for each organizational unit. The analysis results are shared with management and unit heads in an awareness workshop and a call to action workshop. The action plan which is developed during the latter consists of three parts:

In step 4 of the HPO Diagnosis the employees get a full debrief of the HPO scores and attention points of their unit, conducted by the unit’s managers and team heads, coached by the HPO Center. This is again done in an awareness workshop and a call to action workshop. During the latter workshop an action plan is developed consisting of three parts:

To evaluate which progress the organization has made, a second HPO diagnosis is conducted in step 6 after 1½ to 2 years. The activities of this step are the same as in step 2 (and possible steps 3 and 4) with the difference that they are performed by the HPO Coaches, supported and coached by the HPO Center. The aim of the second diagnosis is not only to see in which units progress was made and where not, but also to identify additional HPO attention points so further improvements can be achieved.

The moments when we saw that things started to become better in the organization came gradually. The first moment was the awareness workshops. During these workshops we talked, managers and employees together, about what was wrong in the organization and what should improve. We used the results of the HPO diagnosis for that. Recognizing the improvements that needed to be made built a joint foundation. The second moment was the call to action workshops in which we asked people to think about what they could do to improve the situation and how we could set to work with the improvement suggestions put forward during the HPO diagnosis. In this step we created the feeling that as individuals and as a group we would start to work toward HPO. And the third moment was conducting the so-called Go HPO sessions in which we said: “We have made the plans and now we are really going to do it, we are going to work on the improvement suggestions and become HPO!”