Purpose – The purpose of this study is evaluate whether the high performance organization (HPO) framework can satisfy the recent urgent request of Thai business leaders to create a unique organization which is better able to deal with unpredictable circumstances and increased competition. To establish the suitability of the HPO Framework it first has to be made sure that this framework is applicable to the Thai business context as previous research has shown that management techniques originating from the Western world cannot be indiscriminately transferred into non-Western contexts.

Design/methodology/approach – During several workshops and seminars in Bangkok, participants were asked to complete the HPO questionnaire. The collected data were analyzed using a second-order confirmatory factor analysis to evaluate whether the data on the 35 items in the HPO framework group into the five independent factors: continuous improvement, openness and action orientation, management quality, workforce quality and long-term orientation.

Findings – The data yielded, with a high reliability, four of the five HPO factors as present in the original HPO framework. The dropped items were either confounded with other factors or items that may be another dimension in the data or a sub-dimension of other factors. The long-term orientation factor was dropped, as the accompanying items did not unidimensionally measure this construct. This did not mean that long-term orientation (LTO) is not relevant in the Thai context; there simply were no items included that measured LTO properly in the Thai context.

Originality/value – This is the first research into the validity of the HPO framework in the specific Thai context.

In a study performed in 2012, the opinions of Thai executives and business persons were solicited about current trends in management and strategies in Thailand (Wattanasupachoke, 2012). Based on the responses, several scenarios of the future of the business context in Thailand were drafted. From these scenarios, the topics which were regarded as being of most interest and importance for the next decade were listed: the need for creating a unique organization to better confront unpredictable circumstances (such as political unrests, online social media and corporate social responsibility issues) and increasing competition, differentiation of the organization in the areas of service excellence, branding, technology development, market coverage and design, focus on making strategic alliances and successful outsourcing and attention on increasing customer satisfaction. In the mind of the Thai business leaders, these topics, if dealt with adequately, will enhance profitability. A way to deal with the aforementioned topics is the high-performance organization (HPO) concept. An HPO is defined as:

An organization that achieves financial and non-financial results that are exceedingly better than those of its peer group over a period of time of five years or more, by focusing in a disciplined way on that what really matters to the organization. (de Waal, 2012a, b).

To become an HPO means that an organization is in the right shape to deal precisely with the topics as described by Wattanasupachoke (2012), and as such adopting the HPO concept could be the way forward for Thai business leaders. However, it first has to be made sure that the HPO concept is applicable to the Thai business context, as previous research has shown that management techniques, such as the HPO concept, often originate from the Western world and cannot be indiscriminately transferred into non-Western contexts (Elbanna and Gherib, 2012; Holtbrügge, 2013; Matic˙ , 2008; Palrecha, 2009; Rees-Caldwell and Pinnington, 2013; Wang, 2010). It is therefore imperative that we first look at what the literature tells us about HPO in Thailand.

An overview of 290 studies into high performance and excellence conducted in the period 1960 to 2007 (de Waal, 2006, rev. 2010; 2012a) revealed that in 19 of these studies (6.6 percent), Asian organizations were involved. In 3 of those 19 studies, Thai organizations were included, but not one single study looked at Thai organizations exclusively. In a recent article, de Waal and Tan Akaraborworn (2013) provided an overview of the HPO literature for the period 2008 to mid-2012 and concluded that in this period, no comprehensive HPO studies were to be found, as most of the HPO-related studies were into facets of high performance in the Thai context. The article did remark, however, that the lack of academic articles on HPO in Thailand did not mean there have not been initiatives in this field in Thai organizations, as the HPO concept had already been introduced as an organizational development concept in 2002 through the Thailand Quality Award. To bring the review of de Waal and Tan Akaraborworn (2013) up to date, another literature review on HPO in Thailand – using academic databases such as EBSCO, Science Direct and Emerald – over the period of mid-2012 to mid-2013 was performed.

Chaikambang et al. (2012) investigated the effects of strategic cost management on goal achievement in food businesses in Thailand and found that several dimensions of

Andrews and Chompusri (2013) reviewed how the Thai concept of kreng jai (defined as an individual being considerate; taking another person’s feelings and ego into account; seeking to restrain his/her own interest or desire in situations where there is the potential for discomfort, conflict or loss of face) influenced the assimilation of organizational practices transferred from the European headquarters to the Thai subsidiary and found that kreng jai complemented, reinforced, elaborated or contradicted the behaviors predicted by the traditional comparative etic dimensions of culture when applied to the Thai workplace environment. Chaimahawong and Sakulsriprasert (2013) looked at the key factors affecting the process of business succession and post-succession of family firms in Thailand and discovered that personal characteristics of both the potential successor and the incumbent (such as having the necessary skills required to operate the business, the willingness of the successor to join the family business and the preparation level that the potential successors have before joining the family business) and context factors (which are associated with changes in the economic environment that has the effect on family business operation) determine the success of the succession process. Ditkaew (2013) investigated the effect of the quality of accounting information systems on the effectiveness of internal controls and reliable decision making in Thai industrial firms and found a positive relation between the two and also with the performance of the firm. Kantabutra and Avery (2013) examined the business practices of Thailand’s largest conglomerate, Siam Cement Group, and found that sustainable leadership principles as practiced in this organization had a positive relation with enhanced brand reputation, customer and staff satisfaction and financial performance. Finally, Teeratansirikool et al. (2013) examined the mediating role of performance measurement in the relationship between competitive strategies and firm performance and found that whatever strategy a firm chooses, a strong emphasis on performance measurement will have a positive impact on firm performance competitive environment.

Looking at this literature review, the conclusion has to be once again, just as in the study of de Waal and Tan Akaraborworn (2013), that no holistically and scientifically validated framework of what constitutes a high-performing Thai organization has thus far been documented in the academic literature. A way forward might be to use a framework that has not been developed specifically for Thailand, but that could be validated for this country.

Such a framework is offered by de Waal (2012) who introduced an HPO framework, consisting of five factors and 35 underlying characteristics, which was developed based on data collected worldwide, both in developed and developing countries including many Asian countries. Not only has the HPO framework been empirically validated in three Asian countries – Nepal (de Waal and Frijns, 2009, 2011), Vietnam (de Waal et al., 2009) and the Philippines (de Waal and Haas, 2013) – it has also qualitatively been shown to be a valuable technique for Thai organizations to improve in a sustainable way (de Waal and Tan Akaraborworn, 2013). Despite this promising result, the question remains whether the five factors and 35 characteristics of the HPO framework are valid in the Thai context. An answer to this question is of utmost importance, as research into application of the HPO framework has shown that organizations can expect considerably better financial and non-financial results (de Waal, 2012).

Therefore, the research question of this study is:
Is the HPO framework valid in the Thai context? This research question is particular interesting because the Thai management has been dominated by Western theories and concepts which, in general, did not take into account the particular Thai context (Fisher and Härtel, 2004; Choonhaklai and Singsuriya, 2008; Cornelius et al., 2010; Khruasuwan et al., 2009). The remainder of this article is structured as follows. In the next section, the HPO framework is described. Then, the research approach and results are given. This is followed by the analysis, and the article ends with a conclusion, limitations of the study and possibilities for further research. 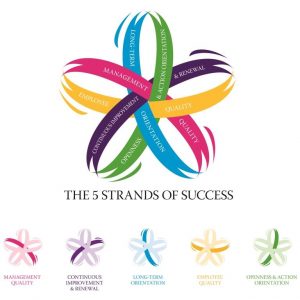 empirical study in the form of a worldwide questionnaire (Phase 2). The first phase of the study consisted of collecting the studies on high performance and excellence that were to be included in the empirical study. Criteria for including studies in the research were that the study:

Read this article (published in Wiley Periodicals), including exhibits and results in this PDF paper!